The installed Android SDK is too old. Version 24.3.4 or newer is required

The number version might be different in your case. Here are a few possible causes for the error:

1) You actually need to upgrade your Android SDK.

2) You have the wrong path for the Android SDK installation on Visual Studio. (change it on Tools->Options->Xamarin)
3) Mixed Xamarin extensions (this was my case)

After reinstalling the Android SDK and checking the everything was fine on that part I went to check on Visual Studio extensions (Tools->Extensions and Updates). It turns out that  I caused a mix up of versions, since I already had Xamarin and Visual Studio 2013 side by side. and now 2015 had another one, my Visual Studio 2015 ended up with 2 extensions for Xamarin. Disabling one of them solved the problem and the designer was working again.


The one that I disabled was titled "Get Xamarin" and I kept the one that shows in the image. Unfortunately I uninstalled the bad extension before taking a screenshot. 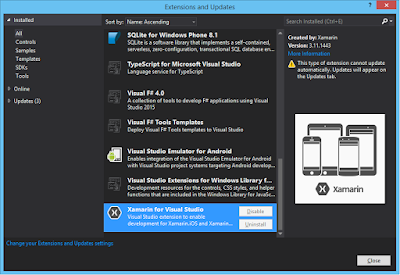 Now you might not experience this problem if you have VS2015 in a clean install, but my computer does not have a clean install since 2011. Good luck!