Showing posts from 2013
Show all

Where is Silverlight now?

December 20, 2013
Time ago I wrote an article  about the comparison between of HTML5 and Silverlight. That article was indeed about the "comparison" itself rather than another attempt to compare the two; mainly because I consider that kind of measuring to be pointless. Then again with the pass of time the same question arises: is Silverlight dead? Before going into trying to answer that, allow me to be clearer than what I was at the time and let me rephrase the question: is the silverlight plugin for browsers dead? Well... the answer is yes, not even a "maybe". But as with any existing software, dead is not actually extinct. We still have people writing code in COBOL, FORTRAN,  DELPHI and VB6. And this is because the enterprise market does not move at the same pace as the consumer market. They invest in infrastructure, they keep it, and they treasure it. And Silverlight was highly adopted in the enterprise for LOB applications. So in that area, Silverlight is going to be there
Post a Comment
Read more

New updates in apps and games 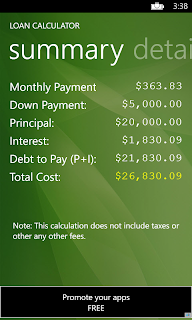 Just recently updated a couple of apps. Loan Calculator Reversi (both Free and Full editions) Loan Calculator First the small "Loan Calculator" app, got a small update. The UI was simplified and some small glitches were addressed. Is hard to improve an app that is already quite useful yet simple. However new versions will improve it even more and not just cosmetic changes. Reversi Reversi got an "almost major" update, with an improved UI (at least over the previous one) and also a new feature that allows the user to see the possibles moves (hints), which of course, you can turn on/off. Hints are available and optional In addition to these improvements in the user interface, the internals were also improved a lot, the new game is quite faster than the previous versions and also plays better. Fixing an issue introduced with version 1.2 when the AI was... not so smart. For next versions... Sounds Statistics board All levels available
Post a Comment
Read more

The invisible property of UIViewController

September 30, 2013
Popular wisdom says "things happen for a reason". However experience has proved me that when it comes to programmers, that is not always true. Things can just happen for no reason at all. That's why we require feedback, here is one and I assure you is in good spirit. So let's me write about something I found when building an app for iOS using Xamarin/Mono. The invisible property. Ranging from windows forms (desktop or Windows Mobile) to WPF, Silverlight/XAML on the web or windows phone. ASP.NET Web Forms or Razor, MVC or classic. One thing I can say for sure: any visual element  has a way to check for its visual status. Call it "Visible" in windows forms, "Visibility" in Silverlight/WPF. There is always an intuitive, simple and trivial way to know if something - that might be visible - it is visible at a particular moment or not. You can't imagine my surprise when I realized that the UIViewController in iOS does not provide such mecha
Post a Comment
Read more

The value of your opinion

July 25, 2013
I have published apps and games for Microsoft Windows Phone, and I update them in a regular basis. Most of the time is because a bug is found, sometimes is a new feature or just because I am trying something new. It helps to keep things moving and people thank you for that. However, I never had to protect an app or a game from human stupidity. Until now . Software developers learn  over time how to deal with the final user - in some measure - and I must admit is not easy; as programmers we are not trained to deal with them, is usually another person's job. But when it comes to phone/tablet apps, that individual is you, because as an 'indie' developer you are too close to the complete production line. I classify the users like this: The happy mute The unhappy mute The fan The hater The stupid The mute ones... There are always people that either like or don't like your app or website, or tool, but they just don't say anything. This is good and b
Post a Comment
Read more

January 25, 2013
This is  the second and final part of this series. Will focus now a bit on what happen when we add multithreading to our work with events. Cleaning Up Events and Context Information In the previous post I mentioned some issues using lambdas and anonymous methods on events. The unsubscribe problem had a tricky "solution" by declaring a "cleanup" method inside the class that holds the event. public void CleanupSubscribers() { SayHelloCompleted = null; } The problem here is obvious since the cleanup method will remove all subscribers from the event. Hence, individually removing listeners from the event gets tricky when using lambdas/anonymous methods. So in this case the recommendations would be: Do not use lambdas if you need to unsubscribe. If you do so, use the cleanup method UNLESS your code is multithreaded.  NOTE: this only applies to the use of lambda expressions and anonymous methods, as for regular named methods you can always r
Post a Comment
Read more
More posts