Showing posts from 2014
Show all

My bipolar approach when recommending a mobile device (phones)

Recommending a new device to somebody else requires a lot of analysis, first of all, they will think you are trying to push your own preferences. And that could be true, at least up to a certain point. For me, however, recommending a device becomes a more complex thing. As a developer I work with and own a lot of them: iPhone, iPad, Android phones and tablets, Windows tablets, both "RT" and regular x86. And while my own device is a Windows Phone (Lumia 925) the right device for you depends on a lot of factors. First, the Phones Let's compare the three platforms, but only phones for now, we'll be talking about tablets later. So we have iOS (iPhone), Android and Windows Phone. At some point the discussion must be about a specific brand, but at the end we will have to sort results by platform. Apps Most likely the app you need is available for both iOS and Android. There is a huge app gap, as well as a huge number of low quality apps in some stores, so my
2 comments
Read more

From AsyncCompleted to async await

August 12, 2014
Since we got the magic of async/await on C# things got much easier on the developer front. Working with Tasks is the key to it, but we also have two older approaches in .NET framework that we need to deal with.  APM (Asynchronous Programming Model) The pair of Being / End methods.  EAP (Event-based Asynchronous Programming) The Method Async / Method Completed pair. Converting from APM to Tasks is achieved by means of the   System.Threading.Tasks.TaskFactory   class and its generic counterpart. Now converting from EAP to Tasks  requires us to use the TaskCompletionSource<T> class and notify of the state of the task as it goes. See the example of a "handshake" operation in a WCF service. I am also using the approach from my older post regarding events and anonymous methods. The return type of the WCF operation is WrappedResultOfString , and that will be the actual generic parameter of the Task<T> that the HandshakeAsync method will produce. publi
Post a Comment
Read more

The uncatchable exceptions in WCF clients

June 05, 2014
Did you ever have a problem with a WCF client throwing exceptions you can't catch? If you have used WCF clients from Windows Phone, Silverlight or Xamarin.iOS, you might have noticed that it is not possible to create Synchronous or Task-Based operations; the functionality is reduced to the Event-based Asynchronous Pattern (EAP). That means that the way to call a WCF method and get the response is usually as follows: var client = new MyWCFClient(); client.DownloadDataCompleted += (sender, e) => { try { //accessing e.Result here might raise an exception in another //thread, that will not be captured by the 'catch' below. } catch(Exception ex) { } }; client.DownloadDataAsync(url); Our results are wrapped in an auto-generated class that inherits from  AsyncCompletedEventArgs , this class has a property  Error  of type  Exception , that will carry information about the error and a property  Result  with our expected return value. Accessing th
Post a Comment
Read more

Batch as usual Recently I was in the need of modifying a huge amount of files across a network share. After installing Serviio media streaming service I noticed that it will crash "randomly". After checking the logs it was clear that ffmpeg was crashing when trying to open subtitle files that were not in the encoding indicated by the Serviio console. I needed a quick way to update all subtitle files to a common encoding, so I decided to convert all files to UTF8. Since I use a windows environment I went directly to PowerShell and wrote this.  Get-ChildItem -path .\ -filter *.srt -file  | ForEach-Object { (get-content $_.FullName) | Out-File $_.FullName -encoding utf8 } This worked almost right except for files with "[" or "]" (among other symbols) on the name or path. To solve it, just added the "-LiteralPath" switch to tell powershell not to consider any wildcards on the path name and just use it exactly as it is.  Get-ChildIt
1 comment
Read more 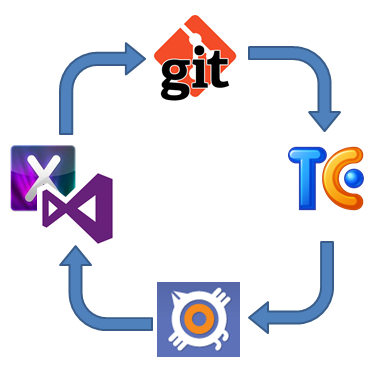 In addition to pizza, caffeine, and video games, a developer requires a lot of tools, and I mean "a lot". Each one is different so here I want to showcase what I use, and briefly explain why. The idea of this post rather than make any type of advertising (notice there are no links at all) is more to actually find out what other people use and share with you all my experience. So, the profile:  .NET Developer. The usual work: Web applications with ASP.NET (Web Forms and MVC) Windows Forms Windows Presentation Foundation Windows Phone Apps iOS Apps  Of course, I might code almost every day a bit of JavaScript and some HTML/CSS fixes, along with some other things, but that's not enough to consider it the main course. The Infrastructure Before coding, organization and planning is everything, and that means for me 3 things, since I am a SCRUManiac: Source Control Issue/Bug tracking Continuous Integration For source control, I prefer Git particularly,
Post a Comment
Read more 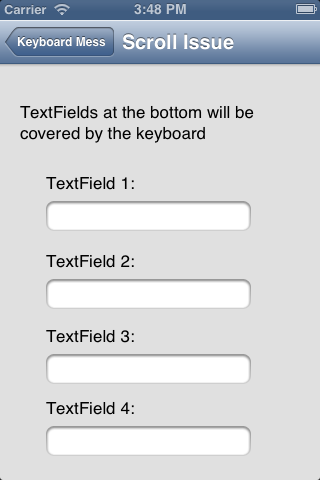 One the first entry of this series I covered the issues with the keyboard in iOS not hiding automatically when needed. In this second - and final - entry on the subject I am going to go for the most of annoying issue when creating UIs in iOS. The keyboard overlaps a focused TextField  If you have a TextField below the keyboard top edge position, they will be hidden once the keyboard shows up. The keyboard size is 320x216 points* in in portrait mode, so anything below the 264 (iPhone 4/4s) or 352 (iPhone 5/5s) points won’t be visible.  It is so simple that is almost unbelievable, but it happens as you can see in the images. Since this default behavior is inconvenient we are going for the workaround. The solution is not pretty but it is trivial: we need to place the UI elements inside a UIScrollView  and will use notifications to monitor when the keyboard will Show/Hide and will scroll the content of the container to ensure that views inside are always visible. We are u
1 comment
Read more 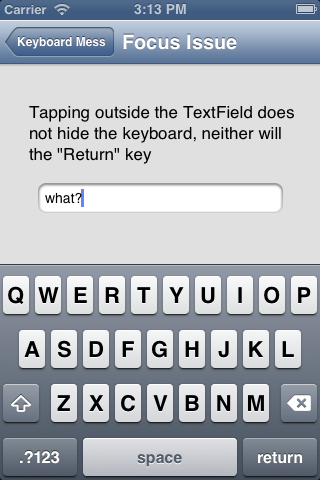 When you are a developer for more than one platform, you might find that what is considered basic or pre-built in one, it’s incomplete or completely missing in another one. This entry is about fixing some issues with the virtual keyboard on iOS; especially when it hides your text fields or keeps the input focus. Xamarin Studio/Mono and XCode were used for this example. Hiding the keyboard Tapping inside the TextField will show the keyboard, but it won't be possible to get rid of it by tapping outside or pressing “RETURN” on it. This is something pre-built in Silverlight for Windows Phone. Tapping outside of the textbox or hitting the “back” key will hide the keyboard. But well, there is no back key on the iPhone. So let’s start by creating and extension method that we will use in the rest of the solution. The method will return the view that is the first responder or the “active” one. public static class Extensions { public static UIView FirstRespon
Post a Comment
Read more
More posts